Oil skimmers are equipment pieces that eliminate oil floating on the surface of a fluid. Commonly, oil skimmers work as they are made of materials to which oil is more likely to stick than the fluid it is floating on, and simultaneously, the fluid has very little attraction to the oil skimmers. Now, the question arises, where these skimmers are actually used. In this guide, we will focus on the application of Oil Skimmers. 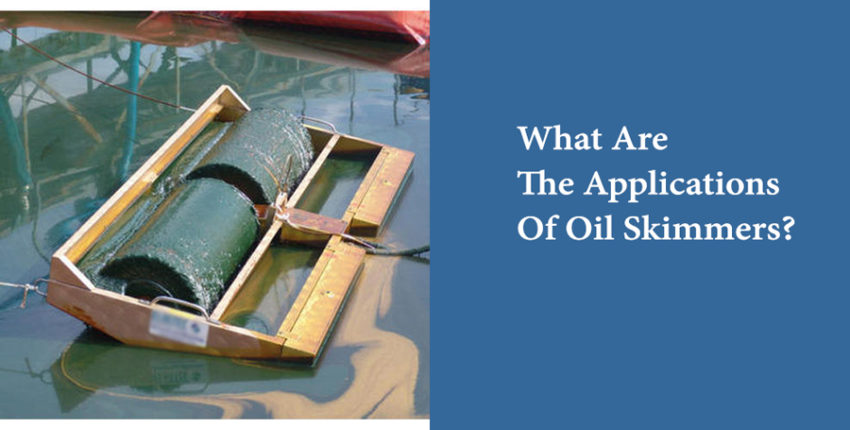 Typical Applications of an Oil Skimmer

In a sewage treatment plant, there is almost always the availability of grease and Oil. The oil is tough to deal with the primary treatment as it would actually need an immense amount of coagulants to deal with this oil with the large OPEx. This would also not be perfect for the bacteria in the secondary treatment procedure and deadly for membrane systems in the tertiary treatment process. Oil Skimmers is an equalization tank with the lessen agitation will be able to eliminate the share of oil from such sewage.

All machining needs an oil, coolant, grease, all of which are expensive and after machining, the coolant-oil combination is gathered in a tank, where the oil floats to the surface and can be eliminated with oil Skimmers.

Effluent from refineries has large quantities of hydrocarbons in their wastewater making it impossible to do tertiary and secondary treatment without the separation of the majority of the Hydrocarbons by using skimmers. The retrieved hydrocarbon/oil is fed back to the crude oil tank for further reprocessing.

Particular chemical companies manufacturing solvents or companies by using pricey solvents are mostly not able to re-use these solvents since it has oil mixed and floating. In such cases, disposable of these solvents can cost upwards of $500 per barrel. It is the place where multiple oil skimmers will actually reduce oil disposal and encourage re-use.

Some oils give actually foul odor. Allowing this oil to stay in the process effluent or liquid allows the odor pervades around the complete of the liquid. Oil skimmers are able to eliminate these oils to a very substantial amount leaving only minimal trace contents of oil behind.

Certain oils are extensively used as raw materials in animals, soap, and fish feed. Your company’s waste oil can be a precious resource to companies manufacturing the above. The former saves on the price of treatment, the latter find a reasonable source of the raw material.

Most of the world’s crude oil is transported around the sea through ships. Whenever there is a breach in the ship's hull or an accident abroad, the ship leaks oil on the water’s surface. It can be near the coats or deep into the ocean. In such cases, weir, floating drum, and funnel skimmers are extensively used to eliminate the oil from the surface.

Pipes are basically used to transport process liquid or effluent can clog due to tramp oil sludge created due to the availability of oil. Pipe clogging can be avoided if the oil majority is removed by using oil skimmers.

Water is polluted with oil cannot be reused as process water in most industries. When the oil is eliminated from this water and along with other treatment steps water can be reused and recycled and thereby instituting ZLD (Zero Liquid Discharge).

Login to quote this blog

You cannot quote because this article is private.